Last year I had the pleasure of working as a Concept Artist designing a whole bunch of shots at Atomic Fiction for "Looper". I did a great deal of Concept Design for the futuristic cities seen in the film. I then took several of my concepts to final by completing the matte paintings for the big screen.

Here's a design sheet to get the futuristic vocabulary started on the project.

A quick concept for future Shanghai and the final matte painting (above). Both painted over a plate of modern San Francisco.

Here's the tech assembly (above) for a futuristic holographic-billboard. Since the hologram in the film was going to be somewhat transparent, I had to design the structure and projection blades for it.

Below is a bunch of nighttime concepts I designed with Looper's telltale "abandoned" buildings invaded by squatters and the poor. In some buildings you can see campfires lit. 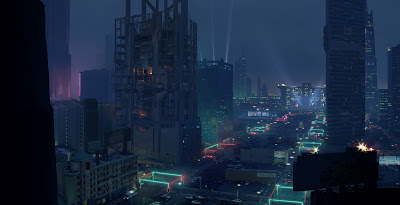 Stoski
Chris Stoski is a Concept Artist and Art Director in the Film and Games industry. Currently this is where he posts his explorations in Concept Design and Cartoon Art.